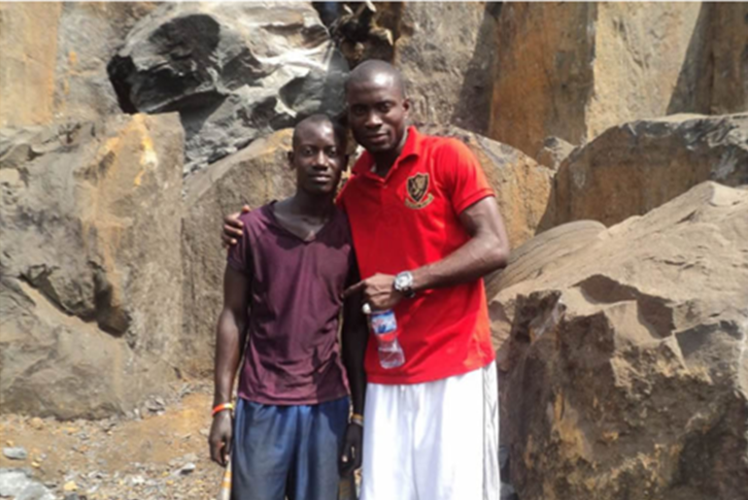 SALVAGING CHILDREN FROM A LIFE OF DESTITUTION: Robert Garguah, Jr. (r), with 16-year-old Justin, a child laborer in the rock quarries of Rock Hill, whose dream is to become an engineer

Breaking The Chains Of Poverty One Child At A Time: Young Liberian Seeks To Kindle A Groundswell Movement To Educate Poor Children In His Post-War Nation

When Robert D. Garguah Jr. first returned to his native Liberia in 2010 after fleeing the country during its brutal civil war some fourteen years earlier, his goal was to visit the most underprivileged communities to find the neediest children who could benefit from his organization’s education scholarships. And, with 76% of Liberia’s population living on less than a dollar a day, there’s no shortage of such communities, one of which is the eponymous Rock Hill, where poor families toil in its notorious rock quarries to eke out a living.

On his visit to Rock Hill, located on the outskirts of Monrovia, Liberia’s capital city, Robert watched as the nondescript sunbaked figures of laborers, scattered among the mounds of crushed rocks that pockmarked the quarry, went about their backbreaking tasks. It was a scene poignantly reminiscent of images of Nelson Mandela and his fellow African National Congress political prisoners crushing rocks on Robben Island—except, these were not prisoners and many were children.

Crouched over, with trails of sweat hewed across their dust-strewn faces, they pounded rocks between their legs into bits. And, dwarfing the intensity of the laborers’ pounding, the sun beat the brows of all and sundry—men, women, some with babies tied to their backs, and children. The rhythmic clanging of their hammers against the rocks, accompanied by the rude dexterity with which even the youngest children swung their hammers, gave Robert goose bumps in spite of the sweltering tropical heat. So, Robert decided to talk to a boy rock crusher, if only, to at least momentarily yank the child away from the callous monotony of the chore.

The boy told Robert his name was Justin and that he was 16-years-old. He said he had never been to school because his parents were poor and that all he had ever

done was crush rock in the quarries.

As Justin spoke, his parched face was etched in a demure awareness of his depraved circumstance, but his eyes radiated with an indefatigable exuberance that his dreams were nonetheless achievable.

“Here is a boy who was born in the midst of the Liberian Civil War and despite all he’s been through, he still has a dream to become an engineer. So the question is: How do you help a young man like Justin and other underprivileged Liberian children realize their dreams?” asked Robert, rather rhetorically, because though the question might lend itself to a laundry list of intractable challenges, he is nonetheless passionate about doing something to help find solutions.

That is why in May 2010 he joined forces with Dekontee Doboyou-Howard, whom he says shares his passion, to create The Movement for Education First, Country Second / Liberia Initiative for Less Fortunate Children (ME1C2/LILFOC Foundation, Inc), whose goal is to create educational and social economic opportunities for underprivileged Liberian children by offering scholarships and providing school materials to them, as well as developing recreation and learning facilities to encourage a conducive learning environment.

“You don’t have to be a millionaire, but if you can transform one life in a community and that life can transform another, we can rise up together and build a nation that we dream of.”Robert Garguah, Jr. Roberts, middle, standing with some of the kids who benefit from his organization’s scholarships and donations of school materials

And, through its Each One Educate One Scholarship Fund Drive, ME1C2/LILFC Foundation has already plucked 52 child laborers from the rock quarries and put them in the classroom.

“We encourage and motivate the kids on our scholarships to excel academically and what we have discovered is that many of those kids who used to spend all day crushing rocks rather than being in school, but now have the opportunity to sit in the classroom, are extremely bright,” said Robert.

It is this awe-inspiring transformation in the lives of underprivileged kids that Robert is passionate about replicating throughout his war-addled nation, where over 250,000 people lost their lives in a 14-year bloodcurdling civil war.

And, if Liberia is to to claw itself out of the ashes of its devastating war past and truly emerge as an economically-viable nation, Robert believes that education will have to play a critical role in this transition. His experiences have taught him that there is a noxious connection between illiteracy and poverty, which seems to reinforce his belief that “education is unequivocally the route out of poverty…”

Robert was only 3 years old when his country was plunged into its brutal civil war. And, though only a child, memories of witnessing “many horrific things” are still etched in his mind.

And, notwithstanding the civil war interrupting his schooling and causing him to become a refugee, Robert believes that his pursuit to develop himself through education has helped him to overcome his turbulent past.

“I wasn’t born with a silver spoon in my mouth and if it wasn’t for the opportunity that I have been afforded, and if I wasn’t determined enough to pursue my education, the odds of me being where I am are extremely slim. God has blessed me tremendously and I feel the need to give back because every time I see that underprivileged little boy

or girl, I see myself,” said Robert.

With a degree in Culinary Arts from Atlanta Technical College in Atlanta, Georgia and a second degree in Business Management with a focus in Hospitality and Tourism Management from Strayer University in Morrow, Georgia, Robert credits his father, Gledebem J. Garguah Sr. and his mother, Bea B. Garguah, for instilling in him a deep quest to improve himself.

“My father made the difficult decision to leave his family to travel to the US to pursue his education when I was just three months old. And, months before the civil war flared up, my mother too traveled to the US for a short stay but couldn’t return because of the war. So, for about 11 years, I wasn’t able to see my mother and father, but through all that time, they worked hard to send me to school until I was able to join them,” said Robert.

When Robert finally joined his parents in the US in 2003, he enrolled in high school where he exceled and was awarded the HOPE Scholarship Program, a merit-based scholarship for academic achievement, to pursue his college education.

Robert has experienced much in his young life, but he says he has “tried to turn those negatives into positives, which has developed into this passion to help others who may be experiencing some of those depravities I experienced as a child. You don’t have to be a millionaire, but if you can transform one life in a community and that life can transform another, we can rise up together and build a nation that we dream of.”

Turning the tide may seem daunting, but Robert believes that educating poor children is key to ending the legacy of poverty in his war-torn nation.

If you would like to support Robert’s efforts and/or find out more information about his foundation, you may visit the foundation’s website or check out its Facebook page.