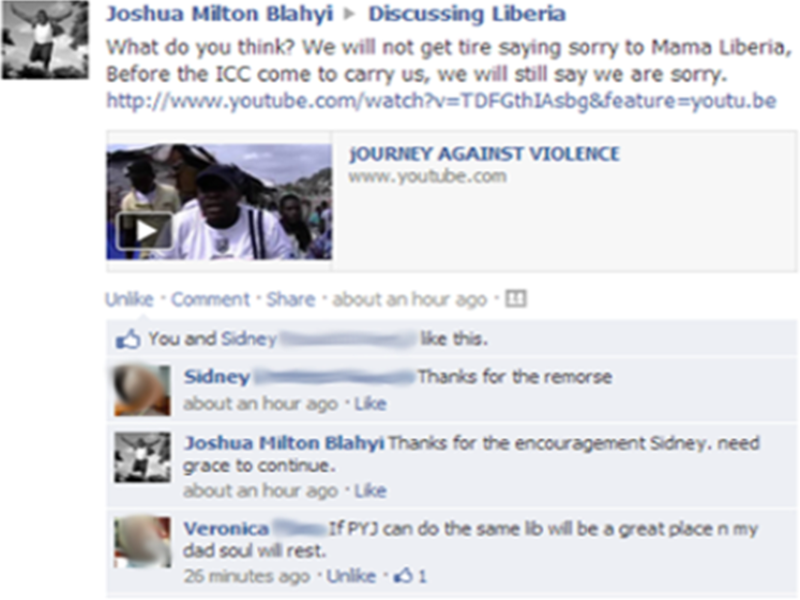 Could A Former Brutal Liberian War General Become A Champion Of Reconciliation In His War-torn Nation?

Joshua Milton Blahyi, a former Liberian warlord known as “General Butt Naked,” has been called many names – a mass murderer, an occult priest, a cannibal and the list goes on – but could his new life as an evangelist and the director of a program helping to rebuild the lives of former child soldiers and outcast street youth make him a champion of reconciliation in his war-ravaged nation?

The Liberian Civil War, which lasted for 14 years and resulted in the deaths of over 250,000 people, was described by Stephen Ellis in his book, The Mask of Anarchy, as a war which “…topped and surpassed [all other wars] in form and character, in intensity, in depravity, in savagery, in barbarism and in horror.” And, if all the superlatives of the grotesque brutality that was on display during Liberia’s Civil War could be personified in one person, that person would have been General Butt Naked.

He was the embodiment of all that made Liberia’s Civil War such a mind-bending spectacle of the most ferocious exhibition of human brutality. And, in our world of viral videos, to know who General Butt Naked was, all one has to do is to watch The Vice Guide to Liberia, in which he confesses to ripping out the hearts of young children and drinking their blood.

A confessed mass murderer, General Butt Naked is now a completely reformed man on a mission to wage a new war – a war to save souls and salvage the lives of Liberia’s most disadvantaged youth and engender reconciliation in his war-battered nation.

“We will not get tire saying sorry to Mama Liberia. Before the ICC comes to carry us, we will still say we are sorry.”Joshua Blahyi

Today, rather than destroying lives, Blahyi is a Christian evangelist committed to rebuilding lives. It may probably be hard to imagine that a man with Joshua’s past could be so completely transformed, but he attributes his transformation to a supernatural encounter with God who spoke to him during one of his ritual child sacrifices, and told him to turn away from his evil ways.

And, abiding by the truism: “action speaks louder than words,” Joshua is manifesting the change in his life through his work. Not only does he run his own church and goes around preaching the Gospel, but Joshua also manages a program to salvage the lives of Liberian youth worst-affected by the lingering effects of the civil carnage.

Many of those young people live in some of the worst ghettos in Liberia. Some are former child soldiers and reintegrating them into society is a humongous challenge. Poignantly describing this challenge in The Mask of Anarchy, Ellis writes: “…Liberia today has problems without precedent, chief among which is the presence of hundreds of thousands of young people with little education, little aptitude for employment, and consequently, little reason to be confident in the future.

Tens of thousands of them have experience as fighters.”

Joshua believes strongly that if there is to be meaningful reconciliation in his war-addled nation, there is no greater mission than salvaging the lives of such young people. And, with his Journey Against Violence (JAV) program, he is trying to do just that.

JAV or Liberia’s Hope is a program which plucks disadvantaged young men from the ghettos, puts them in a safe home, assists them to overcome their drug addiction, teaches them the scriptures, and sends them to vocational schools to learn new trades to become productive citizens.

And, by the reactions of at least a few persons who responded to Joshua’s recent Facebook posting of a video about his program, his efforts may slowly but surely be stoking all the right cords to engender meaningful reconciliation in his nation.

“Thanks for the remorse,” Sidney writes.

“Thanks for the encouragement Sidney. Need grace to continue,” Joshua replies.

“If PYJ can do the same, [Liberia] will be a great place n my dad soul will rest,” Veronica adds.

PYJ stands for Prince Yormie Johnson, another former Liberian warlord and accused war criminal, who is now a senator in the Liberian legislature. Johnson gained international notoriety during the height of the Liberian Civil War for filming his torture of Liberia’s President, Samuel Doe, and distributing the video to the media.

But, notwithstanding those positive reviews, there are still many who questions the sincerity of his work. And to them, Joshua says his effort to promote reconciliation has nothing to do with an attempt to shield himself from the prospect of international justice, as some have accused him of trying do.

“We will not get tire saying sorry to Mama Liberia,” Joshua writes in the same Facebook posting. “Before the ICC comes to carry us, we will still say we are sorry.”

Whether those who have been accused of war crimes during Liberia’s Civil War will ever be brought to justice remains to be seen, but in the meantime, Joshua seems to be doing all he can to champion reconciliation in Liberia.

To find out more about Joshua’s program and support his efforts, go to: www.loveliberia.com

You can also read about my own firsthand experience with the amazing work Joshua is doing to transform the lives of Liberia’s disadvantaged youth in the following article below:
Buried Under the Wretched Debris of War: Outcast War-affected Liberian Youth Plea for A Chance to Forge Better Lives for Themselves