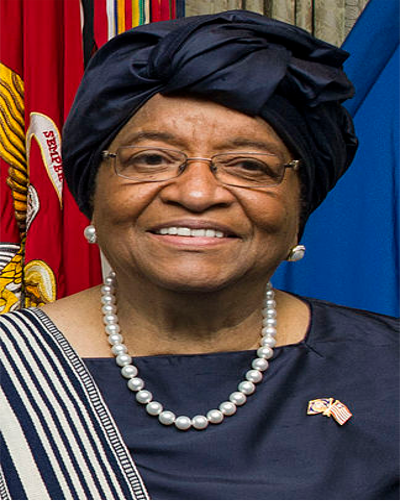 Ellen Johnson Sirleaf (born 29 October 1938) is the 24th and current President of Liberia. She served as Minister of Finance under President William Tolbert from 1979 until the 1980 coup d’état, after which she left Liberia and held senior positions at various financial institutions. She placed second in the 1997 presidential election won by Charles Taylor. She won the 2005 presidential election and took office on January 16, 2006, and she was a successful candidate for re-election in 2011. Sirleaf is the first elected female head of state in Africa.

Sirleaf was awarded the 2011 Nobel Peace Prize, jointly with Leymah Gbowee of Liberia and Tawakel Karman of Yemen. The women were recognized “for their non-violent struggle for the safety of women and for women’s rights to full participation in peace-building work.”

Sirleaf was conferred the Indira Gandhi Prize by President of India Pranab Mukherjee on September 12, 2013. As of 2014, she is listed as the 70th most powerful woman in the world by Forbes.

Sirleaf was born in Monrovia and attended the College of West Africa from 1948 – 1955. She married James Sirleaf when she was 17 years old, and then traveled with him to the United States in 1961 to continue her studies and earned an associate degree in accounting at Madison Business College, in Madison, Wisconsin. Sirleaf did not have a bachelor’s degree, so in 1970 she enrolled at the Economics Institute in Boulder, Colorado, where she spent the summer preparing for graduate studies. Sirleaf studied economics and public policy at Harvard’s John F. Kennedy School of Government from 1969 to 1971, gaining a Master of Public Administration. She then returned to her native Liberia to work under the government of William Tolbert, where she became the Assistant Minister of Finance. While in that position, she attracted attention with a “bombshell” speech to the Liberian Chamber of Commerce that claimed that the country’s corporations were harming the economy by hoarding or sending overseas their profits. (Source: Wikipedia)