My Encounter With The World’s First Twin Child Soldiers and General Butt-Naked, the Notorious Liberian Warlord 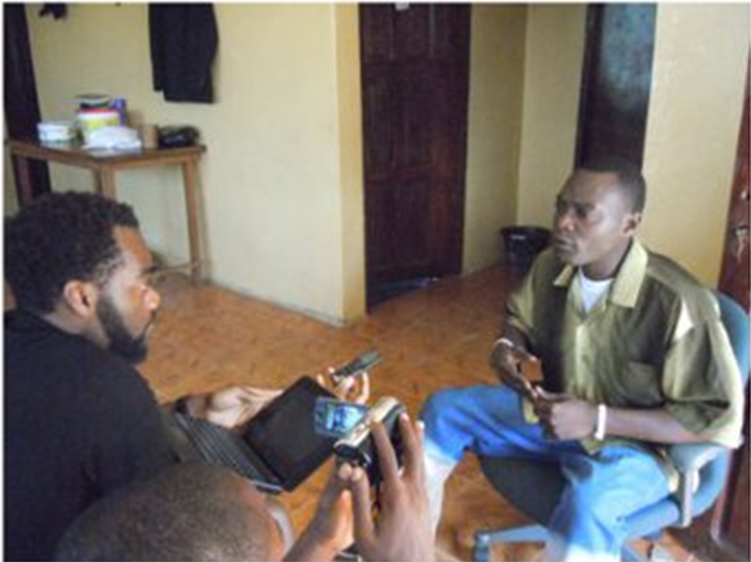 Another first that Liberia may have recorded during its bloody civil war, which was marked by the use of children as combatants, may be the case of Emmett and Eugene Gray, identical twins who were conscripted into a murderous rebel army at the age of 11, violently snatching away the sanctity of their childhood and casting them into the middle of the turbulent wave of ferocious violence that swept over their country.

I first met Emmett and Eugene around the summer of last year, when I was in Liberia during the presidential elections campaign working as a volunteer on the media team of one of the opposition presidential candidates. And, like most former combatants, especially those most disadvantaged and victimized by Liberia’s 14-year civil war, they were roaming the streets of Monrovia, washing parked cars and begging pedestrians for a few dollars. And, that they were also most likely involved in some other unwholesome acts to eke out their living was not lost to me.

But they stood out to me, not least, because they were identical twins. Even more than that, they were young people, not unlike me, who during the most fragile years of their lives, were thrust into the cataclysmic whirlwind of their nation’s disintegration into a bloody civil war. And, not without some attribution to the random dictates of fate, our lives had taken different turns; theirs into the hands of brutishly uncouth adults who would deflower them of their innocence and set them on a path to become veritable killing machines, and mine into a more nurturing environment.

Having also being threatened with forced conscription as a teenager by would-be rebel recruiters who averred that I had to join their so-called revolution for freedom, and was only saved by an aunt who intervened on my behalf, I couldn’t help but empathize with Emmett and Eugene, and other young people like them, whose most precious young years had been irrevocably snatched away from them.

Therefore, on my return to Liberia this time around, I decided to use my writing skills to help young people like Emmett and Eugene, who suffered the devastating effects of the Liberian Civil War, to share their stories to hopefully engender greater goodwill to alleviate their plight.

With that purpose in mind, I set out to find Emmett and Eugene, whom I had struck an acquaintance with, and in my search for them, I found out that one of the twins, Emmett, had since left the streets and was now living with Joshua Milton Blahyi, the notorious warlord whose nom-de-guerre was General Butt-Naked, but is now a evangelist. I, therefore, decided to contact Blahyi by phone and tell him of my intensions to help the twins tell their story to hopefully engender assistance to alleviate their plight.

And, after our conversation, the former General Butt-Naked then invited me to his house to talk to Emmett.

I had read and heard much about the infamous war feats of General Butt-Naked, who went into battle completely in the nude and was supposedly possessed with African “juju” powers that made him and his fighting men impervious to bullets.

As I sat down to talk to Emmett and General Butt-Naked, a man who had confessed before the Liberian Truth and Reconciliation Commission to killing some 20,000 people, he seemed nothing close to the evil incarnate warlord who slaughtered children as part of his barbaric ritualistic devotion.

Not unlike the Biblical Saul, whose life was transformed through an ethereal experience, General Butt-Naked also attributes his transformation to such a spiritual epiphany. And now, rather than spitting commands to his men to execute a captured enemy, his speech is pockmarked with religious anecdotes.

He also exudes a passion to salvage the lives of former child soldiers like Emmett and Eugene, who have become the rejects of society by giving them a helping hand to rebuild their lives. But, in as much as he claims to be motivated by his sense of religious duty to “save their souls,” Blahyi is also very much aware of his warlord past when he conscripted children under his command and drugged them to carry out the most despicable of brutalities. Salvaging their lives may, therefore, also be a way for him to try to absolve some of the guilt that he bears for desecrating the innocence of their childhood. And, Emmett and Eugene were direct child victims of his.

A Snapshot Into The Lives Of Emmett and Eugene

Born in the iron ore mining town of Yekepa, Nimba County, Emmett and Eugene’s birth must have certainly been an uncommon blessing for their parents and a cause for celebration as they held their healthy baby boys in their arms. Blahyi (c), talks with me about his desire to help former child soldiers like Emmett (r) turn their lives around

Their parents, Captain Borbor Gray and Martha Gray, seeking to ensure that they have a bright future, would send them to the Gray D. Allison Elementary School until the 6th grade when they had to stop their schooling because of the ensuring civil war. Captain Gray, the breadwinner of the family, was killed by rebel forces because of his tribal affiliation and military standing. Emmett and Eugene witnessed their father’s execution and from then on, their lives would take a turn for the worse.

The innocence of their childhood slowly began to be stripped away as the war raged on and they became connected to a rebel group where their introduction to militarism began. But, it was not until April 6, 1996,, when a major battle flared up in Monrovia that they became fully involved as child combatants.

They were conscripted by General Butt-Naked into his rank of naked commandoes. He would nurture them into mean killing machines and introduce them to heroin and cocaine. Drugged up, they would commit some of the worst atrocities of war. After the fighting ceased, they were disarmed and went through the UN-sponsored demobilization program, but not enough resources was invested to rehabilitate them to give them a fair chance to rebuild their lives.

And, with no employable skills and hardly any other options, Emmett told me about how he and his twin brother, along with others like them, scavenged the city daily trying to eke out a living among a population that ostracized them and treated them not unlike rodents that needed to be fumigated from their midst.

But, as I sat there with Emmett listening to him express his regrets for his actions as a child soldier and lament about his plight on the street, and how he wished society would forgive him and give others like him a second chance to rebuild their lives, it made me wonder about how our nation still hadn’t honestly addressed the issue of reconciliation, casting those most victimized during our civil conflict by the wayside, and wishing that they would somehow vanished into thin air.

He told me excitedly about how Blahyi had just paid for his driving school lessons and that he was looking forward to getting his license. His bloodshot eyes flickered with renewed hope as he spoke.

Leaving Blahyi’s house, I thought how unfair life had been for most of the youth of Liberia whose futures were irrevocably cast asunder during the most fragile years of their lives. But, living in a society with a distorted sense of reconciliation, where powerful warlords most responsible for the destruction of lives during the civil war are rewarded; while powerless former child soldiers like Emmett and Eugene are shunned, I wondered what chances the likes of him had to rebuild their lives.

Despite all the years of abuse, violence and pain, the vestiges of handsomeness still swept across Emmett’s face and in a different world and different place, he and his brother would probably have had innumerable opportunities to forge a more promising future than the bleak one that seemed to overshadow them now.

Sadly, even as they plea for a second chance, my fear is that because they live in a society that seems to have an abnormally high threshold for empathy, their pleas may, after all, fall on deaf ears.

But, be that as it may, if our nation is to achieve true reconciliation, their voices must be heard and their pleas must be translated into actions to alleviate their plight.