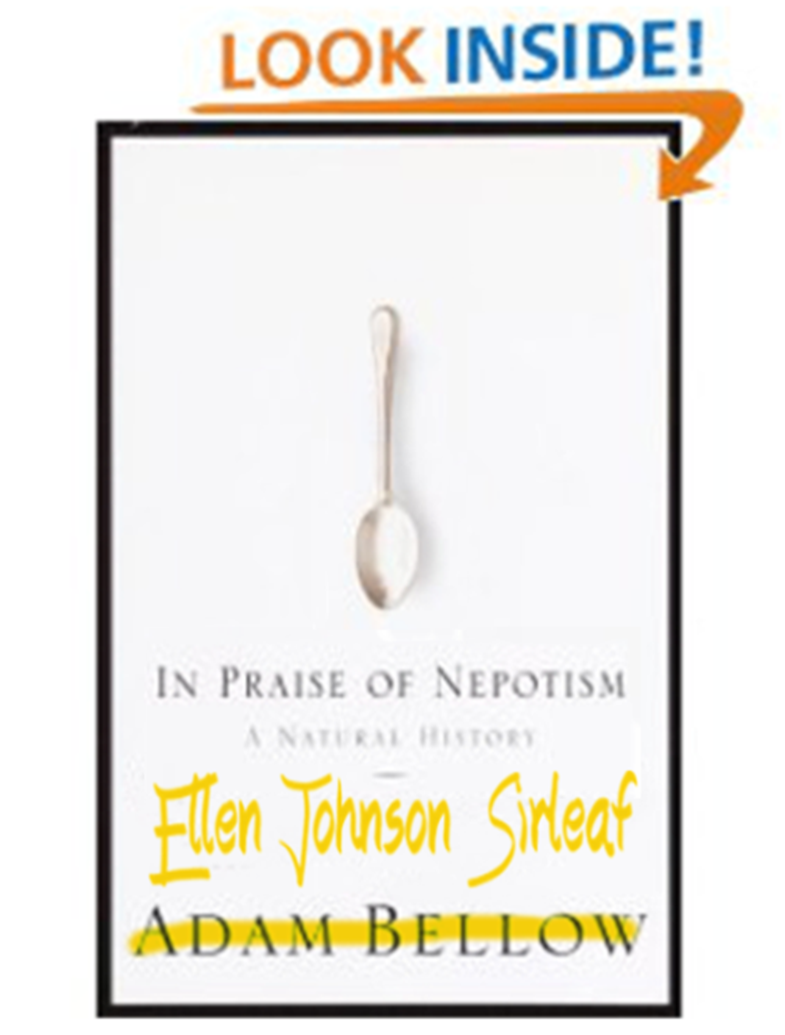 Nepotism Rewritten With An Ink of Pure Nobel Gold: A More Appealing Kind Of Nepotism?

As the debate over nepotism rages in Liberia regarding President Ellen Johnson Sirleaf’s appointment of her 3 sons to key posts in the Liberian government, fermenting simmering disaffection with her leadership, not only has Africa’s first woman president’s commitment to reconciliation in her post-war nation come into question, but her recent utterances in praise of nepotism must certainly leave readers of her memoir, This Child Will Be Great, rather befuddled whether she is one and the same person who authored that book.

Granted, there is a book out there called In Praise of Nepotism: A Natural History by Adam Bellow, which from the look of things, President Sirleaf, a 2011 Nobel Peace Laureate, would now not only gushingly endorse, but with her unabashed display of nepotism in her war-addled nation despite her people’s outcry, she may probably also want to consider authoring a book extolling nepotism.

But, until such a time, to have read President Sirleaf’s book and now hear her defend nepotism, one has to be flabbergasted at the disturbing contradictions in the voice of the author of This Child Will Be Great who, on the one hand, cast aspersions on past leaders for nepotism, now using her voice to staunchly defend nepotism on the other.

Writing about the social urgency for change that obtained in Liberia in 1971 after William Tolbert came to power and began instituting reforms to uplift the long marginalized indigenous population of Liberia, President Sirleaf said Tolbert had a “true development agenda” and that “given a different set of circumstances, he might have succeeded.”

That notwithstanding, in the next paragraph, she goes on to cast aspersions on President Tolbert as lacking the “courage and strength” to change the status quo.

“Any person stepping into the job of president in 1971 would have needed tremendous courage and strength to break the cycle of corruption, nepotism, and privilege that had so long held the country in a stranglehold, while at the same time navigating the waves of change coming his way. Liberian society was more unsettled than it had ever been. What had been a largely docile, uneducated population of young natives had now been radicalized, bringing to memory all the cleavage and disadvantages of the past and using that as a political tool. It was a highly combustible time,” President Sirleaf wrote in This Child Will Be Great (pg. 67).

In another passage in her book, President Sirleaf writes that after the Rice Riot on April 14, 1979 when ordinary Liberians took to the streets to protest the hike in the price of rice, which turned violent resulting in the deaths of several protestors, she was one of the members of a commission set up to investigate the incident and make recommendations.

In the commission’s final report, President Sirleaf said that it urged President Tolbert to “create a code of conduct for all public officials that would begin to tackle corruption and conflicts of interest so rife throughout government.

“Quite pointedly, the commission called on President Tolbert very specifically to examine the social impact of the very high visibility of so many of his relatives in monopolistic business venture,” President Sirleaf wrote, again raising the issue of nepotism in Tolbert’s administration as a bane to the process of national reconstruction that he was, in principle, trying to achieve.

But rather than adopting the commission’s recommendations, President Sirleaf said Tolbert ignored the report.

“What is tragic, I believe, is that had Tolbert instead implemented the major report recommendations of the Commission on National Reconstruction, things might well have turned out differently. Had the government seized the opportunity to make major changes, it could have turned the whole thing around and avoided all the bloodshed to come,” President Sirleaf so poignantly noted in This Child Will Be Great (pg. 90)

So unless President Sirleaf believes that her nepotism is somehow better than Tolbert’s, or to paraphrase Napoleon the pig in George Orwell’s Animal Farm, “all nepotism by leaders is nepotism, but nepotism by some leaders is better than others,” she may also want to strongly “examine the social impact of the very high visibility” of her sons in public positions…

Apparently, by President Sirleaf’s reckoning, probably April 12th, 1980 and all the subsequent violent episodes in Liberia’s recent history could have been avoided had Tolbert displayed greater “…courage and strength to break the cycle of corruption, nepotism, and privilege that had so long held the country in a stranglehold…”

But it is much too easy for President Sirleaf, with the luxury of historical revisionism at her disposal, to slight Tolbert and other past Liberian leaders for failure to seize “…the opportunity to make major changes…”

Therefore, putting historical revisionism aside, the question then is:

Now that President Sirleaf stands in Tolbert’s position as the leader of a “Liberian society that is more unsettled than it had ever been,” (and after a brutal 14-year civil war, the current Liberian society is arguably even more unsettled than it was in 1971), has she displayed the “…courage and strength to break the cycle of corruption, nepotism, and privilege that [have] so long held the country in a stranglehold…?”

It would seem, not unlike Tolbert, and despite her “true development agenda,” President Sirleaf also has hardly shown the “courage and strength” needed to radically overturn the status quo which has held the country in a stranglehold.

Not only has President Sirleaf failed to prosecute officials accused of corruption despite her 2006 inaugural pronouncement to make corruption “public enemy number one,” she also seems to have adopted Tolbert’s playbook by placing her relatives in highly visible public positions and thereby, inflaming public concerns over conflict of interests without, for all intends and purposes, giving a hoot

about the social impact on the Liberian society.

Take her recent interview with Radio Netherland Worldwide (RNW) for example, where President Sirleaf not only justified her crass show of nepotism in Liberia, but also dismissed public protestations.

RNW: You are a beloved leader around the globe and received the Nobel Peace Prize in 2011. Yet, in your own country you’ve been accused of nepotism and corruption. Three of your sons have been appointed to high government positions. How do you explain this?

Pres. Sirleaf: “We have a country that has a very low capacity. Some of our institutions – the ones that have to carry out the important reforms for the transformation of our country – simply do not have the capabilities. They also sometimes lack sufficient integrity to be able to do what is right.

“We have to place certain people close to us in positions to carry out our mandate of reform at the level of competence and honesty that is needed.

“Nepotism is putting somebody who is a relative in a position for which they don’t have the qualifications, integrity or competence. There are times when you have to hire relatives, even when it’s a temporary measure, to achieve your objectives.”

RNW: So you will not fire your sons to show that you are a hero of anti-corruption?

Pres. Sirleaf: “No, I will not. There is a mandate and there’s a job to be done. When that job and mandate is done, perhaps they’ll move on to other things.”

President Sirleaf seems to be saying that because of personnel capacity and trust dearth, she is left with no choice but to place her relatives in certain positions to “carry out the important reforms for the transformation” of Liberia.

I can’t help but wonder when President Tolbert discounted the Commission of National Reconstruction’s report whether he too had made a similar calculation.

But President Sirleaf doesn’t seem generous enough to give Tolbert the benefit of the doubt. Instead, she is all too willing to besmirch his legacy by accusing him of lacking the “…courage and strength to break the cycle of corruption, nepotism, and privilege that had so long held the country in a stranglehold…”

Doesn’t the good Scripture say something about first casting out the beam out of our own eyes before trying to cast out the mote out of our brother’s eye?” (Matt. 7:5)

So unless President Sirleaf believes that her nepotism is somehow better than Tolbert’s, or to paraphrase Napoleon the pig in George Orwell’s Animal Farm, “all nepotism by leaders is nepotism, but nepotism by some leaders is better than others,” she may also want to strongly “examine the social impact of the very high visibility” of her sons in public positions, to borrow from the Commission of National Reconstruction’s report to Tolbert, which he ignored.

Liberians are much too keenly aware of the high price their nation has paid because far too many leaders have fallen short of the courage and strength needed to change the status quo.

We therefore hope that with the passage of a new year, President Sirleaf will show renewed political will to tackle corruption and nepotism to create a new Liberia – one more just, more equitable, and more reconciled.