No Pain, No Blood, No Glory: Liberia’s Rising Mixed Martial Arts Star Sets His Sights On Achieving Glory In The Cage 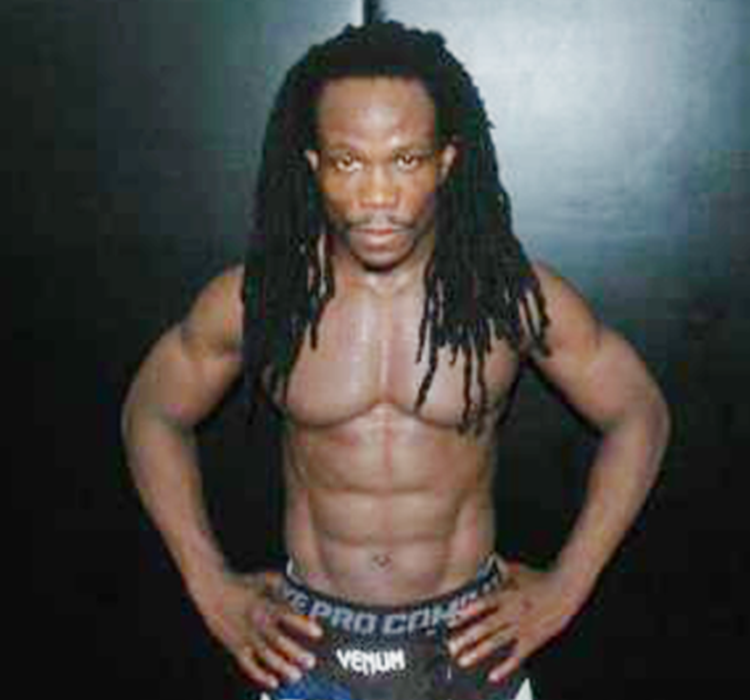 Mixed Martial Arts (MMA) is a relative novice to the world of professional combat sports, but that notwithstanding, with a high-powered arsenal stacked with dexterous knockout and submission moves, it has been grappling its way into the hearts of sports fans around the world as the crème de la crème of combat sports, leaving its closest rivals, boxing and wrestling, looking like they have been wielding a knife in a gun fight.

Under the promotional aegis of the Ultimate Fighting Competition (UFC), MMA has emerged as the most exciting professional combat sport in the USA, garnering record pay-per-view (PPV) ratings that dwarf that of boxing and wrestling. And, as the UFC expands its tentacles globally, along with the emergence of other rival promotional MMA companies around the world, MMA certainly seems poised to win the battle for the hearts and minds of fans of professional combat sports.

And Africa is no exception. With the trailblazing continental MMA promotional company like Extreme Fighting Championship (EFC) based in South Africa, which bills itself as “Africa’s Biggest Mixed Martial Arts Championship” and is broadcast in over 107 countries, EFC Africa has also experienced phenomena growth across Africa with viewership reported in the millions.

With EFC Africa promoting its events as “the quest to find Africa’s greatest fighters,” and UFC planning to expand its events on the continent, African MMA fighters, not unlike African football players like Yaya Toure, Kevin Boateng, and Demba Ba, could well be poised to become international superstars as well.

And one Liberian seems determined to stake his chances in making sure this happens by establishing himself, not only as one of Africa’s greatest MMA fighters, but as one of the best there is in MMA.

An improbable quest you may think, but everything about Jerome S. Paye’s rise to establishing himself as a pro-MMA fighter has been improbable.

Not only is Jerome, a.k.a. “Rapid Strike the Predator” probably the first and only professional Liberian MMA fighter, already making him a standout in his country of 4 million people where football reigns supreme; but his path to becoming a pro-MMA fighter has been fraught with a litany of battles that only one with the true heart of a warrior could have overcome.

Growing up in Liberia in those decades of innocence, before the country imploded into a brutal intermittent civil carnage, which lasted from 1989-2003, Jerome, much like many young Liberians, grew up on his fair share of American movies, followed closely by Indian and Chinese Kung Fu movies. And, it was those Chinese Kung Fu movies that first whetted Jerome’s appetite for martial arts.

But it was not until he was well into his teenage years that he became an adherent of martial arts. And, his decision to pursue martial arts may have probably also been out of necessity, because he was not good at football and too short to play basketball. His small stature also made him an easy target for his peers to pick on. 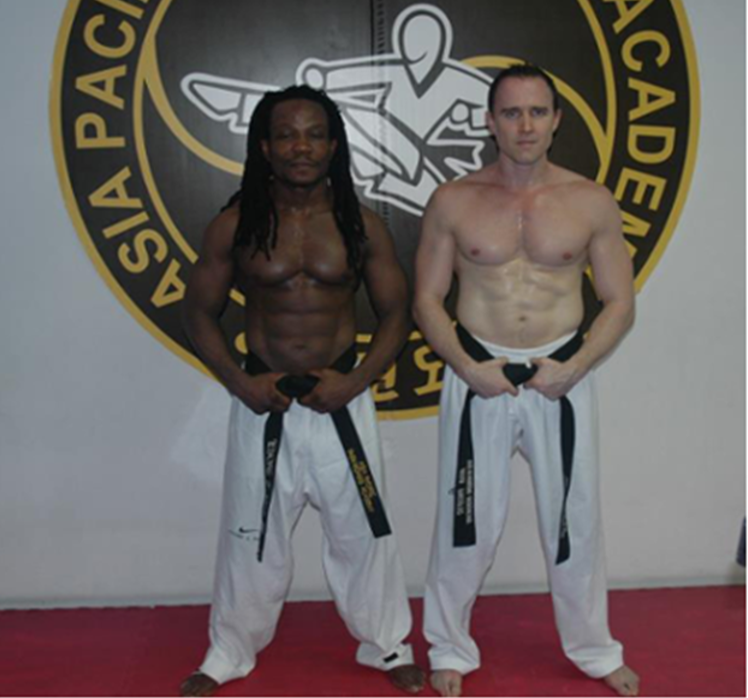 Jerome and Master Don, his longtime Taewondo instructor and inspiration 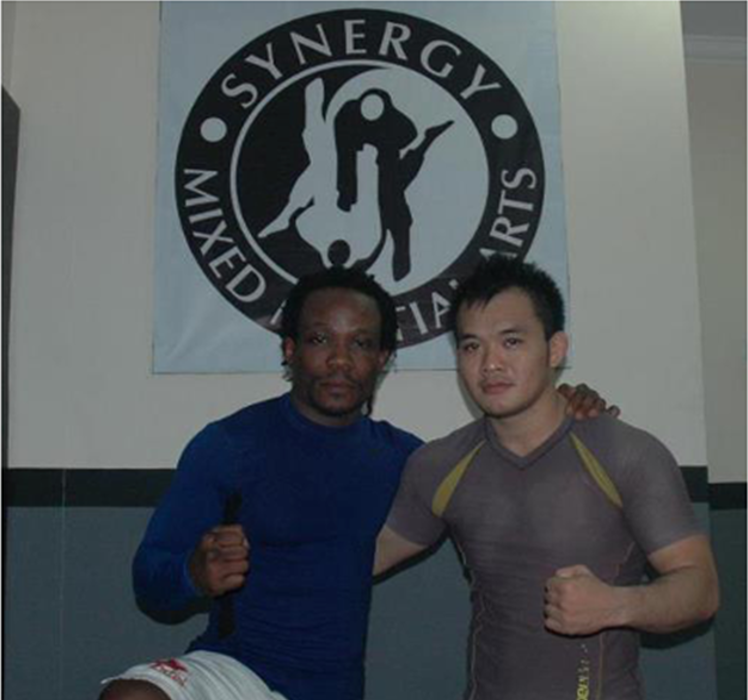 “Martial art was not really popular when I was growing up in Liberia and finding a good training academy was far and in between. But I wanted to do something different because, as a teenager, I was very small in stature and didn’t want to get picked on by the bigger guys. So it became a medium for me to defend myself and also gain the respect of the bigger guys,” Jerome said.

But, at 5’ 6” and with an unassuming demeanor, what Jerome may lack in an imposing physical presence seems to have been more than compensated for with his huge determination and insuperable fighting spirit, which he has displayed throughout the many battles that he has endured to establish himself as a veritable MMA fighter.

After enrolling into a Taekwondo academy during his high school years, Jerome trained hard to become the best he could be; and before long, he started to garner the respect of his peers who took note of his callused knuckles, and as word got around about his deadly flying roundhouse kick from friends who had seen him training.

During this time, Jerome’s father lost his job and couldn’t afford to pay the fees for his Taekwondo classes and even much worse, his tuition at the College of West Africa, one of the top high schools in Liberia.

“Even though then it was not so common for high school students in Liberia to work, I decided to look for a job to earn some money to pay for my school tuition and my martial arts classes. And I found a part-time job working on the weekends as an attendant at a Shell gas station,” Jerome said.

And, it is that insuperable determination to overcome the vicissitudes of life which littered his path at a young age, and would only get worse after his country sunk into the abyss of a brutal civil war, that seems to have marked Jerome’s improbably rise to becoming a pro-MMA fighter.

As the civil war in Liberia raged and the brutality of the war reached endemic proportions, Jerome decided to flee the country to seek refuge in other neighboring countries. But, even as a refugee struggling to meet his daily needs, Jerome found a way to keep on training and improving his martial arts skills.

In 2000, Jerome decided to go to Asia in search of an opportunity to train with the best of the best. And that led Jerome to Thailand where he met Master Don Ferguson, founder of the Asia Pacific Taekwondo Academy, who became his mentor and inspiration.

“After I arrived in Thailand, I was walking in the streets one day and saw the sign

of the Asia Pacific Taekwondo Academy and decided to walk in and express my interest in training there. That is how I met Master Don and I have remained under his tutelage since then,” Jerome said.

Call Jerome’s meeting with Master Don serendipitous or the answer to his improbable quest to become one of the best martial artist that his country, and for that matter, that Africa has ever produced, but having Master Don as an instructor and mentor is probably as good as it gets for any young martial arts student.

With over 25 years’ experience, Master Don is a 5th Dan Taekwondo master who has competed and won several major competitions. He has also been cast in movies such as Ong Bak, The Medallion, Ultraviolet, The Fifth Commandment, to name a few.

Ready For Glory In The Cage

Jerome has probably already accomplished more as a martial artist than anyone from his native country of Liberia. And, for a person with Jerome’s background to achieve such an improbable rise in martial arts to the point of becoming a respected international instructor and pro-MMA fighter in Asia, no one would blame him if he would simply rest on his laurels.

But Jerome’s improbable journey to establish himself as one of the best martial art fighters from Africa seems far from finished. As a matter of fact, to hear Jerome speak, it seems like his remarkable journey has only reached its climax.

“I’m going to be very active in MMA in the next 5 years. My desire ultimately is to fight in the UFC and I know I can go pretty far in the sport,” Jerome intimated.

To accomplish his MMA aspirations, Jerome has been improving his grappling and submission skills under Fransino Tirta, Indonesia’s number one ranked MMA fighter and Brazilian Jiujutsu instructor.

And, as a pro-MMA fighter for about 3 years now, Jerome has already won 2 fights by KO and lost 1 fight during the championship match of the Syena MMA Championship on June 11, 2011.

Watch out world, watch out Africa, watch out Liberia, as “Rapid Strike the Predator” unleashes his terror in the cage and go where no African MMA fighter has gone before!