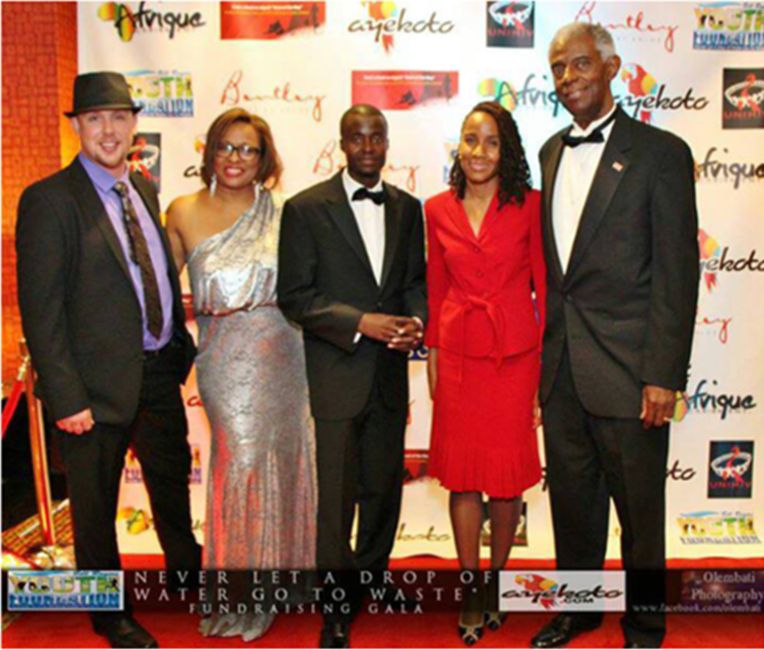 Running With Eyes On The Prize: US-based Liberian Track Athlete Embarks On A Race To Improve The Lives of Underprivileged Children In His Post-war Nation

During the turbulent years of the American Civil Rights Movement, when protesters took to the streets to demand an end to racial injustices against African Americans and they were bludgeoned with batons, knocked off their feet with high-pressure water hoses and tear-gassed, they persevered reassured by the words of the old Negro spiritual, Eyes on the Prize, that if they remained steadfast and kept their hands on the “freedom plow” they would surely overcome.

And, inasmuch as this song may have inspired a movement of people to keep on trudging on to overcome the adversities that marked their struggle to attain civil justice, when one looks at the life of Bill Rogers, it is like peering into a humanoid crystal ball to witness the personification of what it truly means to persevere and keep one’s eyes on the prize to transcend seemingly insurmountable personal challenges and realize one’s dreams.

Born on September 30, 1985 to poor and illiterate parents in the parochial Liberian town of Kakata, located 70 km from the capital city of Monrovia, there was nothing about Bill Rogers’ natal circumstances that could have inspired even the most optimistic soothsayer to see any promise in his future, because everything portended that he would be swept up in the whirlwind of poverty and illiteracy that encircled his young life.

And, for the first few years of his life, the draughts of poverty and illiteracy did seemed to pummel his life even more menacingly than it had his parents’. Because, not only did Bill’s father leave the family when he was 7 years old, leaving his mother to singlehandedly care for him and his five siblings, but by then, Liberia was also embroiled in a brutal civil war, compounding the already abject circumstances of his family.

It was a war that would last for 14 years and morph into a cataclysmic outpouring of violence where rebel fighters, including child soldiers, boasted about acts of cannibalism and other reprehensible atrocities. And, Bill would witness some of this bloodcurdling violence, searing his innocence and leaving an indelible mark on his memory.

“Once, I witnessed the rebels execute 3 men who they accused of looting. The men were tied up in the back of a pickup and the rebels took the first two out and shot them in cold blood. And, when they tried to get the third man, he put up a fight and tussled with one of the rebels for his gun. At this point, another rebel intervened and shot the man through his head,” Bill said of an incident that would become a recurring nightmare for years.

As the war waged on and Bill grew older, he also became a prime candidate for recruitment as a child soldier.

“At one point, I was captured along with some other men and boys and taken to the rebel base where we were ordered to strip naked and line up for inspection. The rebels then selected those who were looking physically fit to be conscripted and because I was really skinny, they shoved me to the side, along with a few others, and said we would remain on the base to do their chores,” Bill said.

But, seeing an opportunity to escape, Bill said he and

another man managed to sneak away unnoticed and crawl under a fence.

“Once we got to the other side of the fence, we ran and didn’t look back,” Bill said.

That may have been Bill’s first time using his legs to escape the coarse realities that life had thrust upon his young brow, but that certainly wouldn’t be his last time.

Running To Escape Poverty And Realize His Dreams

To help alleviate the burden of taking care of Bill and his siblings, Bill’s mother sent him to live with his grandmother. But, after his grandmother passed, Bill was tossed around from one relative to the next before he finally went to live with an uncle in Monrovia when he was 11.

And, it was not until then that Bill finally got the opportunity to start his schooling, but he lagged behind the other kids academically and struggled to catch up.

“Our class teacher used to write in cursive on the blackboard and because I didn’t know how to write well, I used to try to draw the teacher’s handwriting in my notebook but I was just too slow, so there were many times I didn’t finish taking down my notes when the teacher erased the board,” Bill remembered. 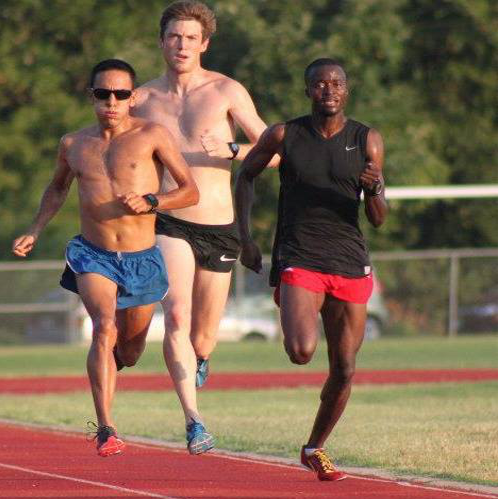 Bill training with other athletes 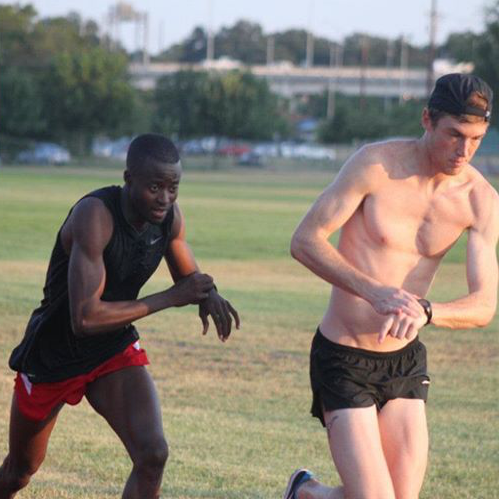 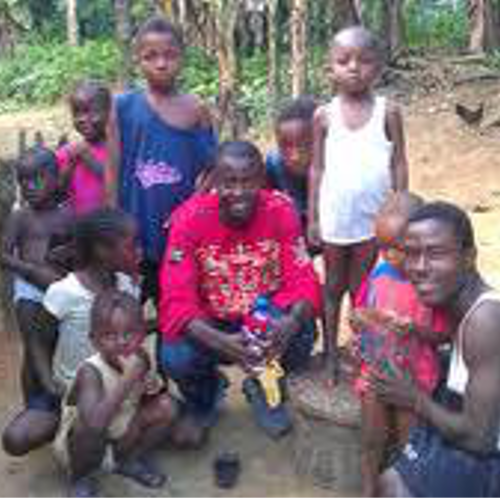 Bill, together with Liberian children 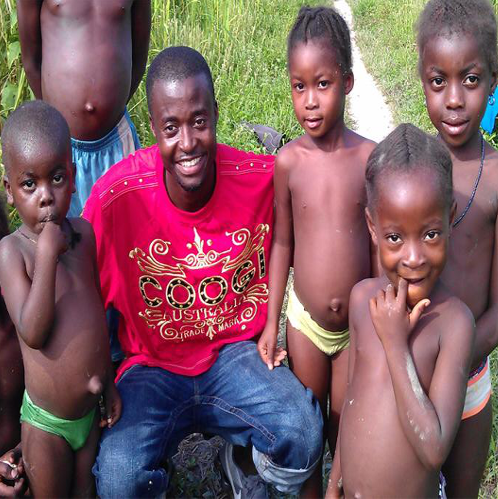 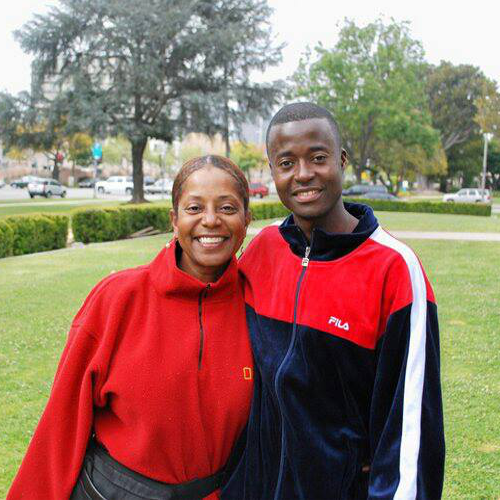 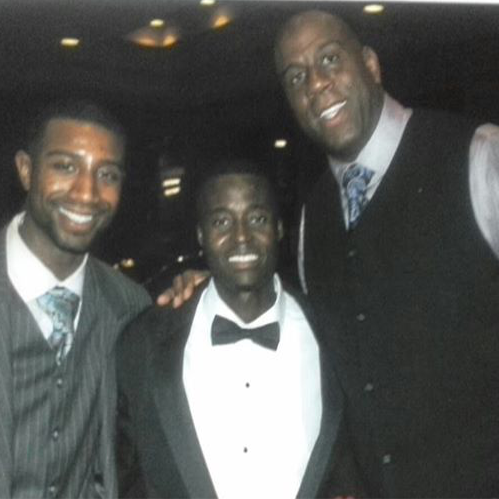 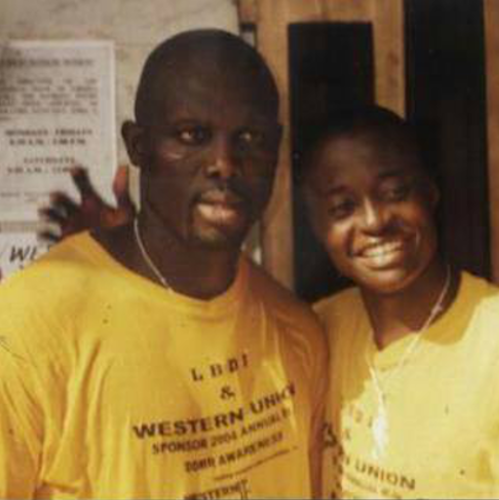 But Bill did not give up. Instead he decided to find a tutor to help him with his studies. And to afford the cost, Bill sold plantain chips in the street to earn enough money to cover the cost for his tutoring.

“My afterschool tutor helped me immensely and I began to catch up with the other students,” Bill said.

What Bill may have lacked academically, he compensated for athletically, becoming actively involved in both soccer and track and field. Bill excelled in track and field, which he took up after seeing some professional athletes running in his neighborhood. Instinctively deciding to join them, he ran alongside them, attracting the attention of the runners and their coach who advised him to pursue athletics.

Bill took their advice to heart and began training in earnest and taking part in various local competitions where he excelled. Bill was soon discovered by the head of Liberia’s Olympics team, Clemenceau Urey, who selected him to represent Liberia at the 2001 World Youth Track and Field Championship in Hungary.

“In Hungary, I participated in the 1500m meet where I was given my first pair of spike running shoes. And because I had never used them before, I developed blisters and tripped over several times during the race. But each time I got up and kept running until I reached the finish line. And, even though I didn’t win the race, I was the highlight because the spectators and media appreciated the determination I showed by finishing the race,” Bill said.

After returning to Liberia, Bill trained harder to

become a better runner, at which point, he met Dr. Grace-Ann Dinkins, a trauma surgeon and former Liberian Olympic track athlete, who took an interest in assisting him develop as an athlete.

“The training regimen at Dr. Kip’s camp was quite strenuous. I was training alongside some of Kenya’s top runners and initially, because I was underperforming, I considered quitting but I was encouraged by my training mates and coaches so I persevered and improved tremendously,” Bill said.

After Kenya, and through the assistance of Dr. Dinkins, who Bill says has been like a mother to him, he was accepted at El Camino College in Torrance, California before later transferring to El Paso Community College in El Paso, Texas where he completed his associate degree. Bill was then awarded an athletic scholarship at Huston-Tillotson University in Austin, Texas where he graduated in 2009 with a Bachelor of Science degree in Kinesiology, the first in his family to acquire a university degree.

Setting His Sight On A More Profound Race

Now, as a professionally-certified fitness trainer, who works with professional athletes, Hollywood

stars and physical therapy patients, Bill has literally run his way to success. But, while Bill remains grateful for all the help he has received along his arduous race to escape the clutches of poverty and illiteracy, he still burns with a passion to do more.

But it is not more for himself. Rather, Bill wants to do more to help other Liberian children whose dreams and potentials are threatened by the blistering winds of poverty and illiteracy.

That is why in 2010, Bill founded the Bill Rogers Youth Foundation (BRYF) to “empower and inspire the youth by introducing them to the world that sporting and athletics has to offer by providing services and projects that address their social needs while providing resources to support self-sustainability.”

This may well be the most profound race of Bill’s life, but he has set his eyes on the prize, determined to keep his hands at the plow to help disadvantaged children in his post-war nation find respite from the storms of poverty pummeling their lives, a situation he knows only too well.

“I launched my foundation to help create opportunities for others in a similar situation like I was as a child that they too may be able to realize their potentials and dreams because I truly believe that if I can do it, they can also do the same with assistance from people of goodwill,” Bill said.

To find out more about Bill’s foundation and/or to support the foundation’s work, go here.