The Liberian Echo 2.0: Still Spreading A Tapestry Of Voices From Africa’s First Republic

Moco McCaulayJune 22, 2015OpinionsViewpoints
This is the old logo of The Liberian Echo, which was used on its Tumblr blog. 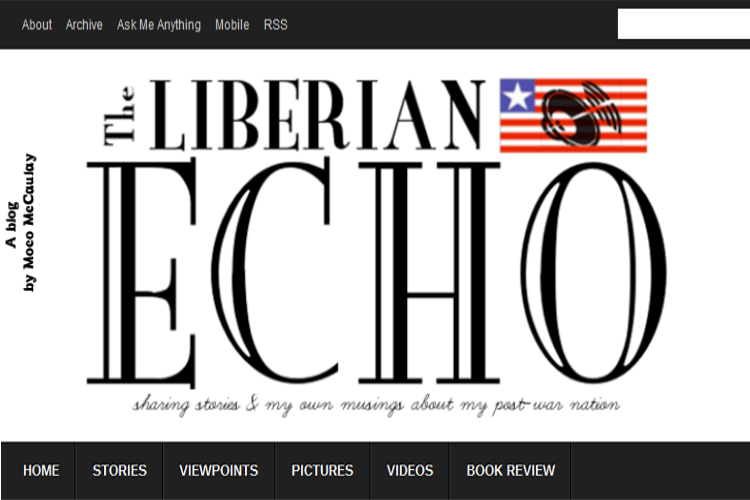 As I write this, it’s hard to fathom that it been over three years since I launched The Liberian Echo. Because, when I started blogging, I had no lofty long-term aspirations but was simply acting on an insuperable yearning to use my writing skills to help tell the story of the generations of young Liberians disenfranchised by a civil war which had cast a pale of pauperism over their lives.

It was a yearning that was inflamed after I spent most of 2011 in Liberia during the presidential elections, and the summer of 2012 there working as an acting news editor for one of the country’s leading dailies. During those times, I encountered far too many young Liberians wallowing in destitution and heard their heartrending stories about the villainous tribulations that had been cast upon their young brows. Some were former child soldiers; others had lost parents and relatives during the war; some had been refugees; others had been raped or forced into prostitution, while many had lost crucial years of schooling and, if they did get to go to school, had received an education that wasn’t worth its salt.

The list went on and on but there was one common thread connecting the deprivations they suffered: a wayward war planned and executed by people scarcely better than those they claimed they wanted to usurp from power.

Through my years of blogging, I have encountered young Liberians whose grit and grind to achieve success not just for themselves but for country, makes me truly believe that a new Liberia is indeed on the horizons.

But, as disheartening as many of their stories were, and as seemingly insurmountable as the challenges that littered their paths, most of these young people were not willing to throw in the tower and succumb to the arduous blows life had thrown at them. Though they had been bequeathed nothing but illiteracy, joblessness and poverty, their eyes glittered with hope of a better tomorrow. Their resilience was infectious. It filled me with hope that, on the shoulders of these young Liberians, Liberia would indeed rise to its noble destiny as Africa’s first republic.

But, that hope notwithstanding, I was appalled by the avaricious attitude of the country’s leaders, who were fleecing the nation of its already scarce resources, rather than maximizing those resources to buttress these young people’s fortitudinous zest to better themselves.

It was a situation that I found especially abhorrent because the country’s political leadership was made up of many of the same people who had cheered on a war that was responsible for stagnating the nation’s progress and thereby, constricting the opportunities available for young people to succeed. So, the first article I wrote on The Libeiran Echo: Liberia’s Youth Imperative: Give Them a Hand-up or Fail At Our Own Peril!, was an attempt to highlight the untenable crisis facing Liberian youth and the urgency for a concerted national effort to turn the tide.

So began my humble forays into blogging. Since that time, the avaricious attitude of politicians hasn’t changed much, if at all and Liberian youth continue to endure a litany of constricted opportunities for progress. But, in spite of that, they still continue to exude resilience. And through my years of blogging, I have encountered some of these young Liberians, whose stories, their talents and commitment, and their grit and grind to achieve success not just for themselves but for country, makes me truly believe that a new Liberia is indeed on the horizons.

That is why, over the last few months, I have put in the work to upgrade my blog into a more dynamic platform to enable me to better share the fascinating stories of these generations of resilient Liberians across their diverse activities – music, fashion, art, filmmaking, literary, photography, etc. By so doing, I hope a beautiful tapestry of their ‘voices’ will emerge, which may inspire other young people to not let go of their dreams.

And, so, I present you with The Liberian Echo 2.0.